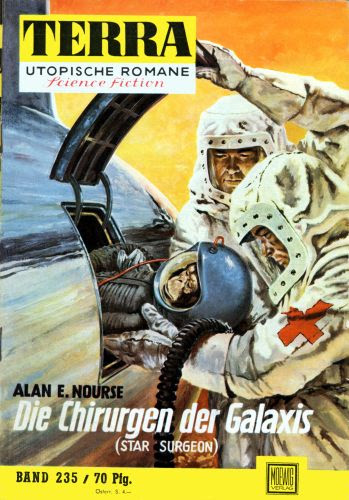 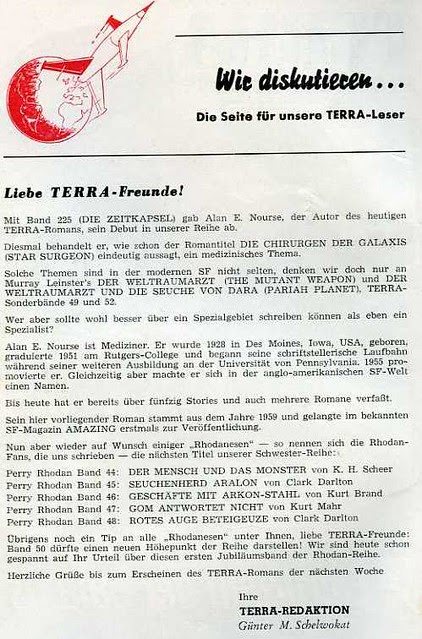 Dal turned and started across the main concourse of the great airport. He felt a stir of motion at his side, and looked down at the small pink fuzz-ball sitting in the crook of his arm. "Looks like we're out of luck, pal," he said gloomily. "If we don't get on the next plane, we'll miss the hearing altogether. Not that it's going to do us much good to be there anyway."

The little pink fuzz-ball on his arm opened a pair of black shoe-button eyes and blinked up at him, and Dal absently stroked the tiny creature with a finger. The fuzz-ball quivered happily and clung closer to Dal's side as he started up the long ramp to the observation platform. Automatic doors swung open as he reached the top, and Dal shivered in the damp night air. He could feel the gray fur that coated his back and neck rising to protect him from the coldness and dampness that his body was never intended by nature to endure.

Below him the bright lights of the landing fields and terminal buildings of the port of Philadelphia spread out in panorama, and he thought with a sudden pang of the great space-port in his native city, so very different from this one and so unthinkably far away. The field below was teeming with activity, alive with men and vehicles. Moments before, one of Earth's great hospital ships had landed, returning from a cruise deep into the heart of the galaxy, bringing in the gravely ill from a dozen star systems for care in one of Earth's hospitals. Dal watched as the long line of stretchers poured from the ship's hold with white-clad orderlies in nervous attendance. Some of the stretchers were encased in special atmosphere tanks; a siren wailed across the field as an emergency truck raced up with fresh gas bottles for a chlorine-breather from the Betelgeuse system, and a derrick crew spent fifteen minutes lifting down the special liquid ammonia tank housing a native of Aldebaran's massive sixteenth planet.

All about the field were physicians supervising the process of disembarcation, resplendent in the colors that signified their medical specialties. At the foot of the landing crane a Three-star Internist in the green cape of the Medical Service—obviously the commander of the ship—was talking with the welcoming dignitaries of Hospital Earth. Half a dozen doctors in the Blue Service of Diagnosis were checking new lab supplies ready to be loaded aboard. Three young Star Surgeons swung by just below Dal with their bright scarlet capes fluttering in the breeze, headed for customs and their first Earthside liberty in months. Dal watched them go by, and felt the sick, bitter feeling in the pit of his stomach that he had felt so often in recent months.

He had dreamed, once, of wearing the scarlet cape of the Red Service of Surgery too, with the silver star of the Star Surgeon on his collar. That had been a long time ago, over eight Earth years ago; the dream had faded slowly, but now the last vestige of hope was almost gone. He thought of the long years of intensive training he had just completed in the medical school of Hospital Philadelphia, the long nights of studying for exams, the long days spent in the laboratories and clinics in order to become a physician of Hospital Earth, and a wave of bitterness swept through his mind.

A dream, he thought hopelessly, a foolish idea and nothing more. They knew before I started that they would never let me finish. They had no intention of doing so, it just amused them to watch me beat my head on a stone wall for these eight years. But then he shook his head and felt a little ashamed of the thought. It wasn't quite true, and he knew it. He had known that it was a gamble from the very first. Black Doctor Arnquist had warned him the day he received his notice of admission to the medical school. "I can promise you nothing," the old man had said, "except a slender chance. There are those who will fight to the very end to prevent you from succeeding, and when it's all over, you may not win. But if you are willing to take that risk, at least you have a chance."

Dal had accepted the risk with his eyes wide open. He had done the best he could do, and now he had lost. True, he had not received the final, irrevocable word that he had been expelled from the medical service of Hospital Earth, but he was certain now that it was waiting for him when he arrived at Hospital Seattle the following morning.