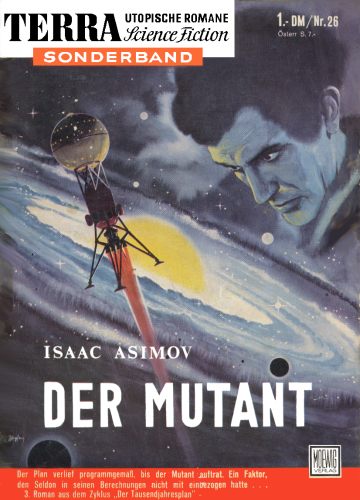 The date was August 1, 1941. World War II had been raging for two years. France had fallen, the Battle of Britain had been fought, and the Soviet Union had just been invaded by Nazi Germany. The bombing of Pearl Harbor was four months in the future. [...] I was 21 years old, a graduate student in chemistry at Columbia University, and I had been writing science fiction professionally for three years. In that time, I had sold five stories to John Campbell, editor of Astounding, and the fifth story, “Nightfall”, was about to appear in the September 1941 issue of the magazine. I had an appointment to see Mr. Campbell to tell him the plot of a new story I was planning to write, and the catch was that I had no plot in mind, not the trace of one.

I therefore tried a device I sometimes use. I opened a book at random and set up free association, beginning with whatever I first saw. The book I had with me was a collection of the Gilbert and Sullivan plays. I happened to open it to the picture of the Fairy Queen of Iolanthe throwing herself at the feet of Private Willis. I thought of soldiers, of military empires, of the Roman Empire—of a Galactic Empire—aha!

Why shouldn't I write of the fall of the Galactic Empire and of the return of feudalism, written from the viewpoint of someone in the secure days of the Second Galactic Empire? After all, I had read Gibbon's Decline and Fall of the Roman Empire not once, but twice.

I was bubbling over by the time I got to Campbell's, and my enthusiasm must have been catching for Campbell blazed up as I had never seen him do. In the course of an hour we built up the notion of a vast series of connected stories that were to deal in intricate detail with the thousand-year period between the First and Second Galactic Empires. This was to be illuminated by the science of psychohistory, which Campbell and I thrashed out between us.

On August 11, 1941, therefore, I began the story of that interregnum and called it “Foundation”. [...] On January 26, 1945, I began “The Mule”, my personal favorite among the Foundation stories, and the longest yet, for it was 50,000 words. It was printed as a two-part serial (the very first serial I was ever responsible for) in the November and December 1945 issues. By the time the second part appeared I was in the army. [...] In 1950, however, hardcover science fiction was just coming into existence. I had no objection to earning a little more money by having the Foundation series reprinted in book form. I offered the series to Doubleday (which had already published a science-fiction novel by me, and which had contracted for another) and to Little-Brown, but both rejected it. In that year, though, a small publishing firm, Gnome Press, was beginning to be active, and it was prepared to do the Foundation series as three books.

The publisher of Gnome felt, however, that the series began too abruptly. He persuaded me to write a small Foundation story, one that would serve as an introductory section to the first book (so that the first part of the Foundation series was the last written).

The mere fact of the existence of the Trilogy pleased me, but Gnome Press did not have the financial clout or the publishing knowhow to get the books distributed properly, so that few copies were sold and fewer still paid me royalties. (Nowadays, copies of first editions of those Gnome Press books sell at $50 a copy and up—but I still get no royalties from them.) [...] And yet there was some foreign interest. In early 1961, Timothy Seldes, who was then my editor at Doubleday, told me that Doubleday had received a request for the Portuguese rights for the Foundation series and, since they weren't Doubleday books, he was passing them on to me. I sighed and said, “The heck with it, Tim. I don't get royalties on those books.”

Seldes was horrified, and instantly set about getting the books away from Gnome Press so that Doubleday could publish them instead. He paid no attention to my loudly expressed fears that Doubleday “would lose its shirt on them.” In August 1961 an agreement was reached and the Foundation books became Doubleday property. What's more, Avon Books, which had published a paperback version of Second Foundation, set about obtaining the rights to all three from Doubleday, and put out nice editions.

From that moment on, the Foundation books took off and began to earn increasing royalties. They have sold well and steadily, both in hardcover and softcover, for two decades so far. Increasingly, the letters I received from the readers spoke of them in high praise. They received more attention than all my other books put together. [...] Matters reached a climax in 1966. The fans organizing the World Science Fiction Convention for that year (to be held in Cleveland) decided to award a Hugo for the best all-time series, where the series, to qualify, had to consist of at least three connected novels. It was the first time such a category had been set up, nor has it been repeated since. The Foundation series was nominated, and I felt that was going to have to be glory enough for me, since I was sure that Tolkien's Lord of the Rings would win.

It didn't. The Foundation series won, and the Hugo I received for it has been sitting on my bookcase in the livingroom ever since.

Isaac Asimov : The Story Behind the “Foundation”