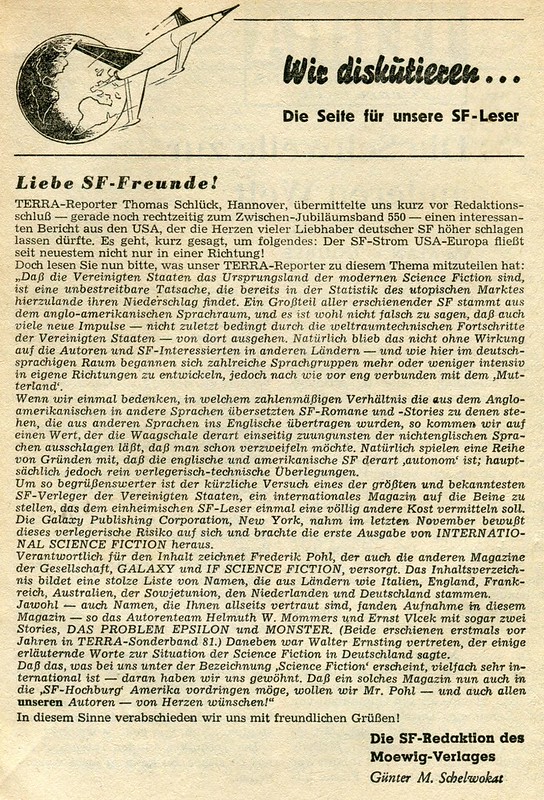 US Digest-size magazine. Two issues, November 1967 and June 1968, published by Galaxy Publishing Corp, edited by Frederik Pohl. The interesting idea of reprinting stories from all over the world – authors ranging from Arkady Strugatski (Russia) through Hugo Correa (Chile) to Damien Broderick (Australia) – sadly but unsurprisingly met with no success.


Pohl also tried hard to persuade Guinn and Sol Cohen, whom Guinn had hired to help with the publishing duties, to switch both Galaxy and If to monthly schedules. In late 1962, they agreed, but soon changed their minds and decided to start a third science fiction magazine instead. This was Worlds of Tomorrow, which was launched in April 1963 and lasted until mid-1967 (it was briefly revived in 1970–71). Another companion magazine, International Science Fiction, was tried in late 1967, but lasted only two issues; it showcased stories translated from other languages, and sales were very weak. Finally, in 1968 Guinn launched Worlds of Fantasy, edited initially by Lester del Rey, Galaxy's managing editor; only four issues appeared.[30] In the middle of 1968, Galaxy was restored to a monthly schedule.